The dozens of moving parts in your engine, transmission and differential and other components of your powertrain are constantly grinding together, and this can cost you. These costs are due to friction and heat, which cause inefficiencies that rob your vehicle of horsepower, torque, load capacity and fuel economy. Motor oil is designed to cut down on the friction in your engine, but oil alone can’t deliver peak performance.

Why Use ELEV8 Powertrain Treatment?

ELEV8 contains nano-particles that reduce the friction between engine and other powertrain parts by filling in the microscopic gaps and imperfections in the parts’ surfaces -and bonding to those surfaces – to allow for unimpeded contact and execution. The smooth parts work together dramatically more efficiently than rough, untreated parts could ever do.

Engineered Lubricants Co. tested six different aspects of engine performance using the state-of-the-art Epsilon Linear Precision Test Machine with motor oil alone and then with motor oil treated with ELEV8. The results showed greatly enhanced operation with ELEV8 in every possible way. Most importantly, the Epsilon showed that ELEV8 reduced friction up to 75%, which opens the door to improvements in virtually all other areas of performance.

You rely on your vehicle’s power, so you don’t want to waste any of it. Those gears and other moving parts in your engine knocking against each other cost you every time they come into contact. Treating your oil with ELEV8 can give your engine the boost it needs by reducing friction and keeping the energy transfer where it should reside. Dynamometer testing shows that ELEV8 can increase horsepower by up to 10%.

Improved engine performance isn’t just about the short term. To get the most out of your investment in your vehicle, you’ll want it performing optimally for as many years as possible. And there’s no better way to ensure long vehicle life than by treating your engine, transmission and differential with friction-fighting ELEV8. Motor oil helps, but testing from a state-of-the-art Epsilon Linear Precision Test Machine proved that ELEV8 takes it to the next level by generating up to a 82% reduction in wear compared to motor oil alone.

ELEV8 helps with more than powertrains: Its effect on hydraulic systems also helps keep workers safe when they’re up in the crow’s nest. Combining ELEV8 with the hydraulic fluid can add extra protection in the event of a damaged fluid line being exposed to electrical power lines. The Southwest Institute found that treating hydraulic fluid with ELEV8 reduced conductivity by 18%.
Independent testing shows that ELEV8 can deliver powerful results to all of the vehicles in your life. Whether you need an 8 oz ounce bottle for a compact car or 5-gallon drums for a fleet of trucks, this amazing friction-fighting nanotechnology is ready to take your vehicle performance to the next level. Shop ELEV8 Performance Products today!

An engine builder decided to put us to the test in his brand new 383 cu. in. boat engine. The performance data for his engine BEFORE adding ELEV8 showed the peak crank horsepower was 452.6 HP at 6,000 RPM. 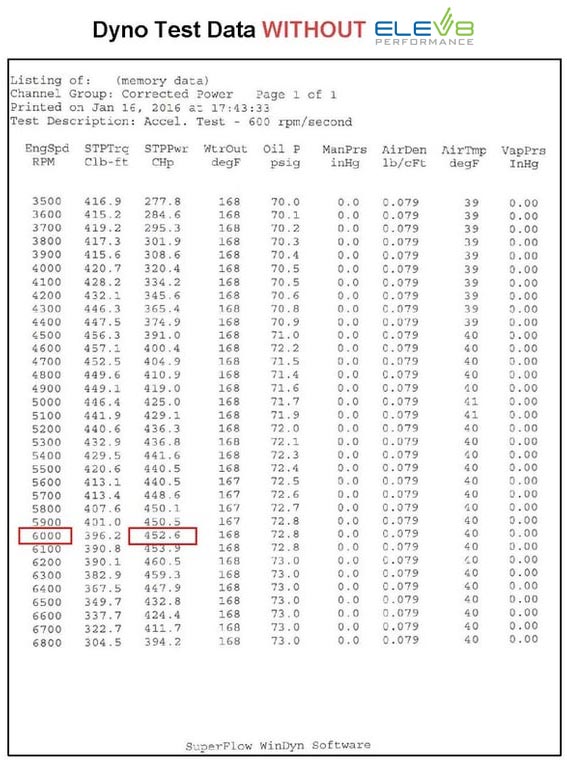 After ELEV8 was added, the engine was run for twenty minutes to give our state-of-the-art nanotechnology particles a chance to bond to the metal. When the engine was tested again the builder said, “It’s making power!” The Dyno pulls after ELEV8 Performance Engine Treatment was added showed a gain at all RPMs and crank horsepower peaked at 494.4 HP at 6,000 RPM. 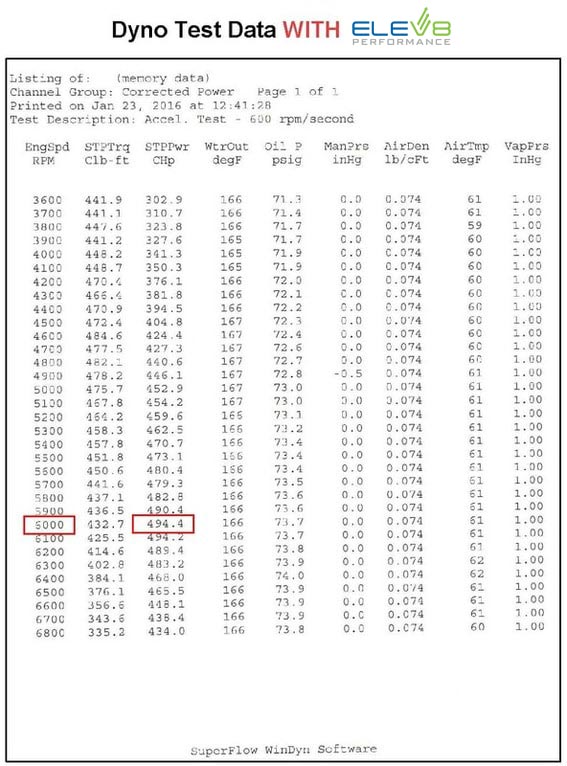 THAT’S AN INCREASE OF 41.8 HORSEPOWER JUST BY ADDING ELEV8!

ELEV8 has been extensively tested to ensure that it is safe under a variety of test lab and environmental conditions.
75% FRICTION REDUCTION 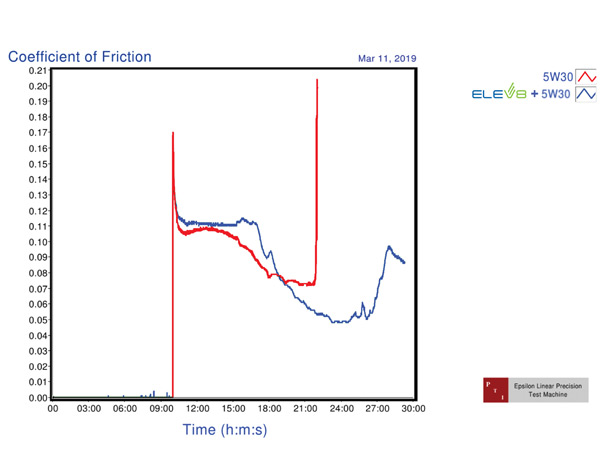 As the time under load is increased, the internal friction of an engine increases as well. ELEV8 shows much a much lower level of increased friction when compared to oil alone. With 5W30 motor oil alone, the coefficient of friction at the point the oil failed was .20. At the same point when the oil was mixed with ELEV8, it was .05 – a 75% improvement – and there was no failure! This is one of the primary reasons ELEV8 delivers much better fuel economy. Your engine doesn’t have to work as hard just to run, much less propel your car.
259⁰F SPECIMEN TEMPERATURE REDUCTION 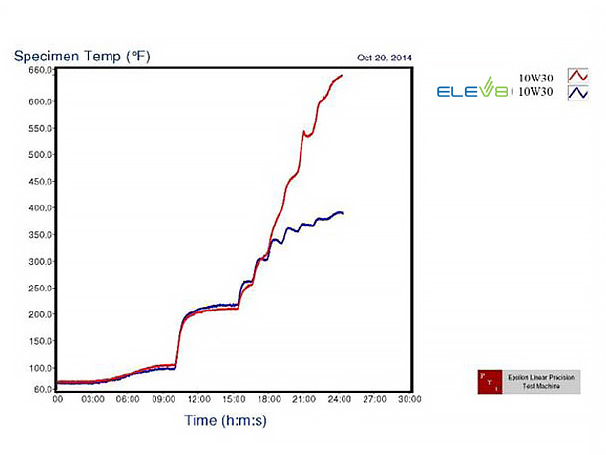 As the total running time of an engine increases, the operating temperature of the specimen increases as well. When we tested the temperature of an engine over time, it reached a high of 649⁰F with only standard motor oil alone. The same engine was tested again for the same length of running time, but this time with ELEV8 added. The results were amazing! The highest temperature reached only 390⁰F for a 40% improvement.
104⁰F FLUID TEMPERATURE REDUCTION 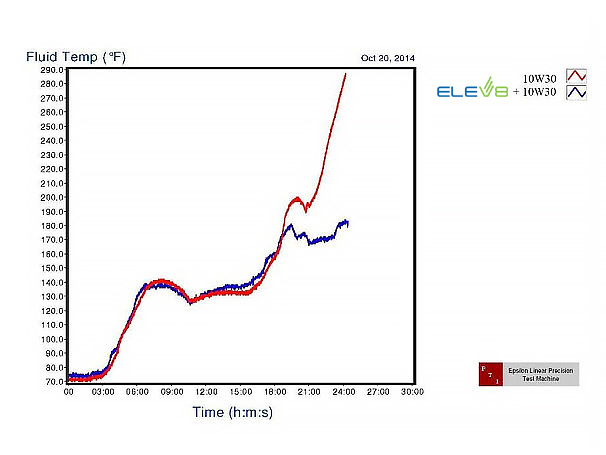 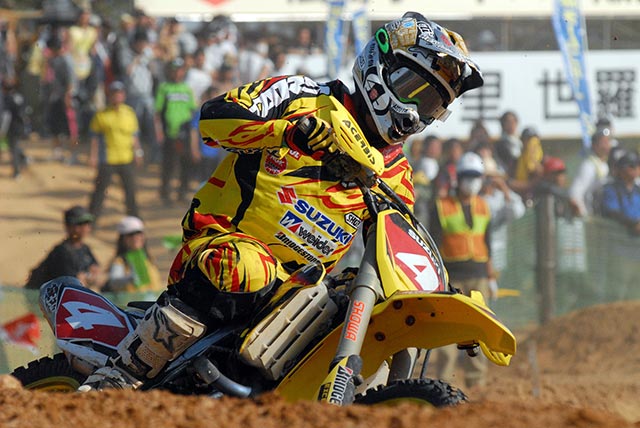 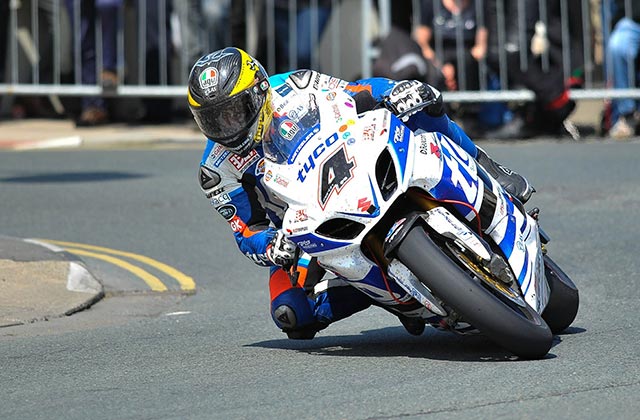 A Power Boost Worth Millions

One of the world’s leading motorcycle racing teams tested ELEV8 in three factory Suzuki 250cc motocross engines using back to back Dynamometer tests. The results: ELEV8 generated between 8% and 10% more horsepower during the three tests.

To put that into perspective, the racing team told us they had never seen any additive – or any product of any kind – create that magnitude of impact on horsepower. In fact, they said, even with an investment in R&D of $3 to $5 million, it is highly unlikely that an 8% to 10% horsepower increase would have been possible.

But don’t worry: You can put ELEV8 in your motorcycle for considerably less than $3 to $5 million! 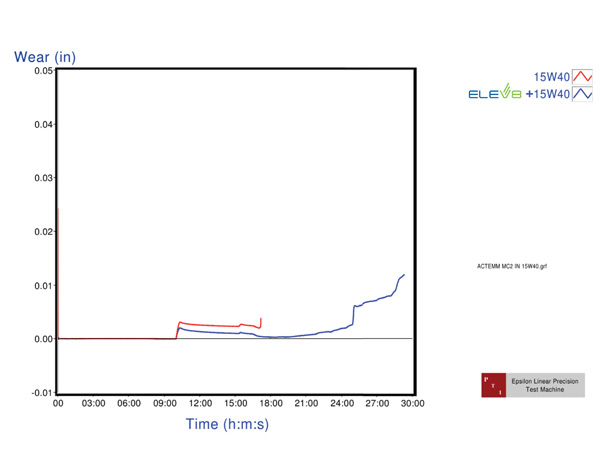 To evaluate the impact of much lower friction levels, we performed a special test to measure how much metal would be worn away under extreme load over an extended time period. We subjected a steel test pin to a controlled wear test with just 15W40 motor oil for lubrication. We then conducted the same test with another test pin, but this time treated the pin with ELEV8. The treated pin showed only 0.0004 in. of wear to the pin, versus wear of 0.0022 in. for motor oil alone, for an 82% reduction in wear. This can mean significantly increased engine life.
302% DIRECT LOAD IMPROVEMENT 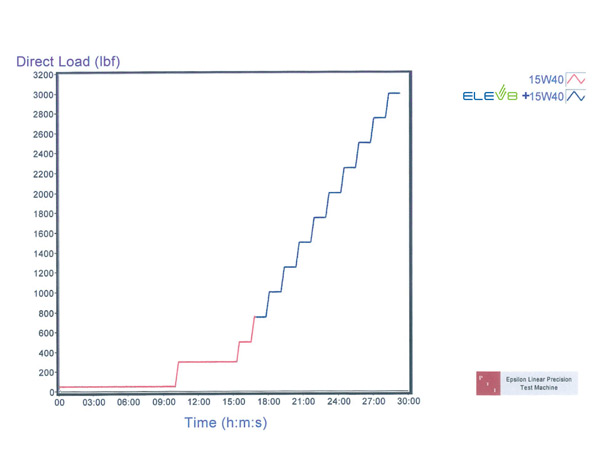 The direct load test was very interesting. Again, we conducted a controlled test of two identical steel test pins. The first pin was lubricated with standard 15W40 motor oil while we increased the direct load on the pin in 200 lbf increments until the friction of the pin caused the test machine to stop spinning. With motor oil alone, the machine stopped spinning at only 747 lbf. When we conducted the same test using a pin lubricated with exactly the same kind of motor oil but adding ELEV8, we were able to apply a final direct load of 3,000 lbf before the test machine stopped spinning, for a 302% improvement in direct load capacity.